Suzi Youngberg is the current President of BPW/Upper Keys, the BPW/FL Council of Presidents Delegate and she serves on the BPW/FL Technology Committee. She became a BPW/Upper Keys member in 2015, and in 2016 she joined the Board where she held positions of Vice President/Hospitality and President-Elect before accepting the Presidency in May 2020. She was voted BPW/Upper Keys Woman of the Year in 2018.

Born and raised in north Georgia and southeast Tennessee (Chattanooga area), Suzi moved to the Florida Keys with her husband Scott in 1997. Both had self-proclaimed “Caribbean Souls” and being a musician, Scott’s career blossomed in the restaurants and resorts of the Upper Keys.

Suzi spent more than 25 years in corporate financial insurance sales, traveling to clients all over the southeast. She was known as one of the foremost experts in flood insurance and lender placed insurance in the southeast United States.

When Scott was diagnosed with cancer in 2014, she decided to make some changes. Going through almost a year of treatment with him in Boston MA put life in perspective and the time spent working on the road became much less attractive. Thankfully his treatment was successful, and he is now healthy and cancer free. As he returned to work, Suzi began looking at other career options that would allow her to stay closer to home.

Her first “local” job was working for a Florida Keys network of eight radio stations, selling advertising. After a short time, she realized that she loved being on the radio! She became a radio personality for a while, hosting several “in studio” shows as well as a couple of “live on-location” radio shows. She is still considered “family” at the radio station and manages to get on the air every chance she gets!

Suzi and Scott began seriously volunteering with the American Cancer Society (ACS) in 2015 to pay back the help they were given in the form of free lodging at Hope Lodge in Boston for more than six months. They were Event Leads for Relay For Life of the Upper Keys in 2016 and 2017. In 2018, ACS offered Suzi a position as Community Development Manager for the Florida Keys. She was responsible for all fundraising in the Keys, and staffed Making Strides Against Breast Cancer walks, Relay For Life events, and the Diamond Gala. Unfortunately that came to an end when the pandemic forced major downsizing at ACS.

Suzi is currently working for The History of Diving Museum as the Community Outreach Specialist.

When Suzi first decided to stop traveling for a living, she joined BPW/Upper Keys. She had seen posts about the organization on Facebook from women in the community she admired and thought it was a great place to start networking. She semi-jokingly says that she made more friends and connections her first year in BPW than she had made in her first 20 years in the Keys while she was traveling for a living.

A fun fact about Suzi is that her big white cat SugarBear walks on a leash and travels regularly to Tennessee and has even been to Colorado and back! 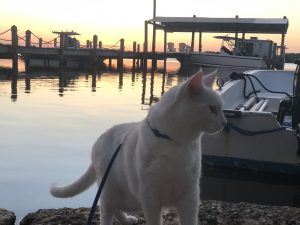