I am taking the opportunity of Member Spotlight to tell you what you need to know about me in narrative form.  My professional credentials are not remarkable, no advanced degree or patents pending.  I am, however, the owner of a successful small business that I did not plan to start.

My career in employee benefits started in 1990.  I was two years out of college, and through a connection at a temp job went to work for my first employee leasing company.  For the uninitiated, this is where a co-employment relationship is established via contract between a small business and an employee leasing company licensed to pay taxes as the employer out of their own accounts.  There is magic in transferring the tax responsibility and sharing in economies of scale created with the true, large group execution of payroll administration, tax payments, workers’ compensation coverage, unemployment, retirement and employee benefits.

I learned quickly, going from a marketing assistant to a full-fledged sales representative in a few years.  I was “weaned” off my salary, effectively being made to sell or starve, with a non-compete employment agreement that later held me fast.  I earned my Florida Insurance Agent license for life, health, and variable annuity sales in 1992.  I bought my first boat, a 17-foot center console in 1993.

In time, I was offered the opportunity to purchase a share in the company for $1,000.  I financed it out of my commissions over four months—management liked me.  It was worth $25,000 when the company sold.

With new management we suffered high turnover, low ethical standards, and blatant nepotism.  I had to watch as relationships I built with clients and co-workers were brutally ended.  Personally, I had married a Tampa native and became Mrs. Samantha Bond Rodriguez.  My two children were born within the first three years of marriage, Matthew now 27 and Natalie now 25.  My career choices were to leave the area or leave the industry; the non-compete agreement was not going to be waived.  I was stripped of my W-2 status, effectively costing me my employee benefits like health insurance, 401(k) match, and employer paid FICA, costing me $21,000 annually.  My contract for commissions was repeatedly violated.  I wrote letters, made spreadsheets, met with attorneys and lost sleep.  The shortfall kept growing, and was over $150,000, and I was offered $65,000 to settle.  I declined because I was so sure I would win in court.  I never got there, and fought tooth and nail to settle for $17,000 years later, paid from a cloaked source.  Proof that what doesn’t kill you, makes you stronger.

Finally, in 2007, the remainder shell company was sold and my non-compete ended.  At home, things started to go sideways as they say, and after bailing my husband out of jail twice for DUI in the same six months, I started to wonder if we could ever fix our relationship.  Financially, I was the breadwinner, and in addition to upgrading our home, we bought a beach condo.  I realized that making excuses for a drunken father to my children was teaching them things I didn’t want them to learn.  Especially my daughter, who may have started making excuses for a drunken husband one day if I had not divorced.

My ex sued me for spousal support, even though he was the more educated.  At trial, we settled, after unnecessarily spending tens of thousands of dollars on attorneys.  Instead of relying on him for child support, I opted to refinance our real estate, holding on to both halves.  I thought how smart I was until I realized I had two mortgages, two kids, no child support, and a business to run.  I remember meeting with my financial advisor and her saying to me, “Well, I don’t know that we have much to talk about.  According to the profile you filled out, you’re $400 short of meeting your monthly bills.” 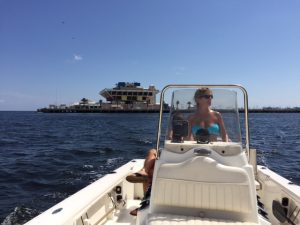 I have never been any good at accounting, though I saw the writing on the wall, and put on the bridle.  I pulled that wagon, we kept the properties (and the boat!), and I sent both kids off to college with help from their grandparents.  I sold the old boat, bought a new-used one from my Dad, and was ready for a new chapter.  It was my intention to move to St. Petersburg and buy a condo, leaving behind 28 years in Tampa.  My boyfriend, now husband, Tim Richman had other ideas, and we now live in a beautiful house in Old Northeast.  My clients make my work pleasure, and I love helping employees, employers, and individuals get the insurance they need.