Hello everyone!  I’m Cynthia Howard and I have been a member of BPW for 44 years!  BPW has brought so much to my life, including lifelong friendships that have formed over the years.  I joined BPW/North Sarasota in 1976.  I have served the LO in several offices and as committee chair: two terms as president, secretary, treasurer and practically every committee the organization offers.  In addition to serving on the local level, district level (remember when we had districts?) and on a few state committees, I now serve as a director with the BPW/FL Education Foundation.  I am looking forward to working with the Foundation as we continue to make available to women an opportunity to pursue higher learning.  I have a personal story that I will share with you later.

Professionally, I have been employed by the Fergeson, Skipper Law Firm in Sarasota for the past 29 years as a Legal Assistant for James O. Fergeson, Jr.  I started with Jay (as he is known) when he first started his practice in 1981.  I left and went to work at another law firm for 11 years before returning to Fergeson Skipper in 1992.  My plans are to retire next year!  I have also worked (and continue to do so) as a freelance writer for Tempo News, the weekly African American newspaper in the community.  I’ve been with the newspaper for over 40 years.

My activism in the community began in the early 1970s when I volunteered with the North County Civic League, the Sarasota County Educational Assistance Program and various other organizations that worked for the betterment of the Sarasota community.  In 1979, I was part of a committee that started the first Dr. Martin Luther King, Jr. Service in Sarasota, which is still celebrated today. 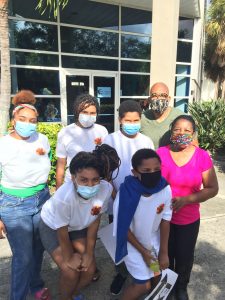 My passion has always been working with youth and children in the community and in my church.  I am a member of the Sarasota County Branch NAACP and member of the Executive Committee where I currently serve as treasurer.  I am also the Youth Advisor for the NAACP Youth Council.  (Pictured is Cynthia with NAACP president and youth in the NAACP Youth Council at a volunteer event.)  In addition, I volunteer with the Safe Children Coalition’s Achievers Program (formerly the Sarasota YMCA Y-Achievers) where I serve as co-chair of the Advisory Council.  The Achievers’ program is dear to my heart because of the difference we are making in the lives of middle and high school students.  The program focuses on academic achievement and career development, exposing students to various careers available to them.

I am also active in my church, serving as choir director and vice president of the Women’s Missionary Society, and as Communications Director for the Florida Region of the Christian Methodist Episcopal Church.

I have one daughter, Brea Chanelle Howard, (and a granddog, Jonah) who recently relocated back to Florida after working for the past six years as a Computer Analyst for Tyson Foods in Fayetteville, Arkansas.  Now for that personal story: Brea received a scholarship to stay in the BPW Scholarship House on the campus of the University of Central Florida from 2006-2008.  BPW/North Sarasota has consistently supported the scholarship house and it was a blessing that someone from our LO had an opportunity to benefit from our support.  It was a great experience for her and I’m proud of what we do as an organization to help others.  May we continue to “pay it forward.”