Posted at 16:14h in Member Spotlight by Sheila Barry-Oliver
0 Likes 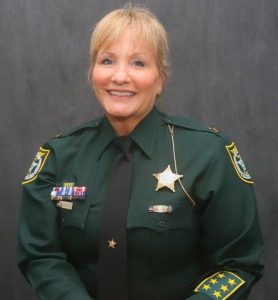 Lee Ann Holroyd is a perfect example of a local woman who made good. In the Keys, a tourist-based community where most everyone comes from somewhere else, Capt. Holroyd is what the locals call a Conch – someone who grew up in the Florida Keys and graduated Coral Shores High School.

For more than 38 years, she has served the public and law enforcement community.  Capt. Holroyd started with the Monroe County Sheriff’s Office (MCSO) in 1983 in a temporary staff support role.  She quickly was offered a permanent spot as an assistant to the Criminal Investigations unit.  After attending Basic Law Enforcement Academy, Capt. Holroyd was assigned to the Upper Keys as a deputy sheriff.  Two years later, she was promoted to sergeant.  She joined the newly created School Resource Officer Program in the Keys and was asked to be the supervisor for the unit for the entire county.

Eventually, she spent more than 10 years commanding a federal narcotics task force focusing on the location and seizure of laundered narcotics proceeds.  These investigations took her all over Europe in order to return seized assets to benefit the community she serves.

She holds many “firsts” with the Sheriff’s Office.  She was the first female detective lieutenant and commander of Special Operations.  Capt. Holroyd is one of the highest-ranking women in the Sheriff’s Office and on the command staff.  Today, she wears many hats: Inspector General and commander of Professional Standards, school security and the Key West International Airport; head of Internal Affairs.

A BPW member since 2012, Capt. Holroyd is active in the community and serves on the boards of Chi Sigma Chapter of Beta Sigma Phi, Christina’s Courage Rape Crisis Center; Monroe County Stars of Hope and serves on committees for many community organizations.  She loves serving her community professionally and personally, and enjoys being a wife and mother, feeling blessed to live in such an amazing and giving community.

Most recently Capt. Holroyd was selected as the 2021 BPW/FL Glass Ceiling Award recipient.  This award is given to a woman who has successfully broken through the barrier of advancement within their profession or organization, enabling them to reach the management level positions previously barred to working women.  CONGRATULATIONS!!