Posted at 09:48h in Uncategorized by Sheila Barry-Oliver
0 Likes 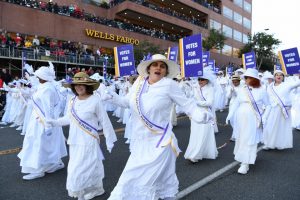 The centennial of the 19th Amendment to the U.S. Constitution has arrived, and people are preparing to celebrate this milestone granting women the right to vote. But we should also reflect on how our entire conception of women’s rights in America, centered around such seminal moments, is deeply skewed. And skewed in a way that makes achieving meaningful equality and voting rights in 2020 more difficult. Rather than pivotal moments, we need to understand the struggle for women’s rights as a centuries-long battle of slow gains (and occasional losses), driven by activism at all levels of society.

Typically, Americans understand feminism in the United States as having come in waves: First-wave feminism began in 1848 with the Seneca Falls Convention and with women’s efforts to end enslavement, and ended in 1920 with the ratification of the 19th Amendment. Second-wave feminism started in the 1960s with the motto “the personal is political” and ended in the 1970s. During this time, women fought to enter the workplace and demanded respect and visibility, while fighting for birth control and abortion rights. Third- and fourth-wave feminism started in the 1990s and have been less organized but continued the focus on women’s rights, often with attention to issues of class and race.

But this approach obscures far more than it explains. Nowhere is this clearer than in understanding the 19th Amendment and women’s suffrage. Most Americans believe that women did not have any voting rights in the United States until 1920. But this is not true. Instead, women’s voting status varied from state to state from the Colonial period to 1920 and even afterward.

Property-holding women often had voting rights in Colonial America, and in some cases, they maintained them as late as the Civil War. These rights were gradually repealed, as early as 1699 in Virginia, and as late as the late 1860s in states including North Carolina and Georgia, which acted because they feared excess democracy. While these rights weren’t universal, men’s voting rights were also limited during this period, thanks to property requirements, albeit to a far lesser degree.

Some states — starting with Mississippi in 1839 — allowed women to vote in specific types of elections, such as only in primary elections or only in state elections. Restricted voting rights for women before 1920 were commonplace in states throughout the Midwest. Except for New Mexico, Western states granted unrestricted suffrage to women earlier, sometimes much earlier — starting with Wyoming in 1869. Colorado, Idaho and Utah all followed before the 20th century.

Sustained efforts to reinstate women’s voting rights where they’d become more restricted or eliminated took off with the rise of two powerful organizations. Starting in the 1890s, the National American Woman Suffrage Association focused on achieving full suffrage for women on a state-by-state basis. This organization preferred a piecemeal strategy in part to appease Southern states and their desire for state-level control. In the 1910s, the National Woman’s Party — which found this approach too slow — focused on direct activism, such as picketing in front of the White House.

But the focus on the 19th Amendment has obscured much of this background. That has consequences, not only for our understanding of voting rights, but for how they were achieved. By ignoring the local gains that took place before the 19th Amendment, we inflate its importance, and we also perpetuate a kind of “Great Woman History” that hones in on people such as Elizabeth Cady Stanton, Susan B. Anthony, Lucretia Mott and Alice Paul. While they are seminal figures, if we exclusively focus on these women, we forget that everyday individuals, such as Virginia Minor, laid the groundwork and also fought for advances. In 1874, Minor appealed a conviction for illegally voting all the way to the Supreme Court.

Furthermore, by seeing the 19th Amendment as a culmination, capping the first wave of feminism with a crowning achievement, we are in danger of forgetting that it left large swaths of the population unprotected, specifically women of color. Indeed, some Southern states only agreed to enact suffrage if they could circumvent the new laws for nonwhite women. While the new law declared that voting rights “shall not be denied or abridged by the United States or by any State on account of sex,” election officials across the nation also subjected Asian, black and Mexican women (and men) to higher poll taxes, grandfather clauses, literacy tests asking impossible questions such as “How many bubbles are in a bar of soap?” and other suppression efforts. These discriminatory efforts specifically became illegal only with the Voting Rights Act of 1965.

In fact, for many women of color, the push for voting rights leading up to the 19th Amendment had not been the top concern. Instead, as they confronted everyday threats of sexual assault or rape and the men in their life faced significant threats of being lynched, their focus was on a far bigger fight: for immediate survival. But this harsh reality is often lost in the narrative about waves of feminism embodied in celebrations of success.

Rights are always byproducts of long, continuous, multipronged fights. During the big pushes for suffrage, women were simultaneously fighting against science and religion that questioned their humanity and argued for natural female inferiority. The late 19th and early 20th centuries also saw a variety of other social reforms, often led by or with crucial support from women, including the Pure Food and Drug Act of 1906 and the 17th Amendment, which called for the direct election of senators in 1913. The role of women in these battles often gets lost thanks to the focus on the 19th Amendment.

And while we often think of the fight for birth control or for fair employment practices as a focus of second-wave feminism of the 1960s and 1970s, in reality, these were pressing issues even in the 1910s and 1920s. Margaret Sanger, for instance, opened the nation’s first birth control clinic (which would later become Planned Parenthood) in 1916, blurring the line between waves of feminism.

In fact, women have always fought for multiple rights at once, and these battles defy easy periodization. Nothing illustrates this better than the long push for an Equal Rights Amendment beginning in 1923 and effectively ending seemingly unsuccessfully in 1982 — but now being resurrected anew.

Focusing on specific judicial or legislative accomplishments and telling a tidy story of feminist waves perpetuates a simplistic view of history — that the democratic experiment is always making steady progress, even if all too slowly. The reality is much more complex. Women’s vision of rights has always been much larger and was never just about voting, even in the early 20th century.

First-wave feminism has yet to actually end and — because rights are never safe and oppression often manifests in new forms — can never end. Indeed, the early 21st century has seen new and ongoing voter suppression, as registration rosters are purged and as states shrink the number of polling places and require new forms of documentation to cast a ballot. And because the familiar historical narrative says that voting restrictions for women ended in 1920, people are less prepared for and are even unable to grasp these setbacks. This enables efforts to make voting harder for those groups that have fought the longest and hardest for the right to cast a ballot.

With a better historical view of feminism, equitable rights have a chance of being secured and safeguarded in 21st-century America.